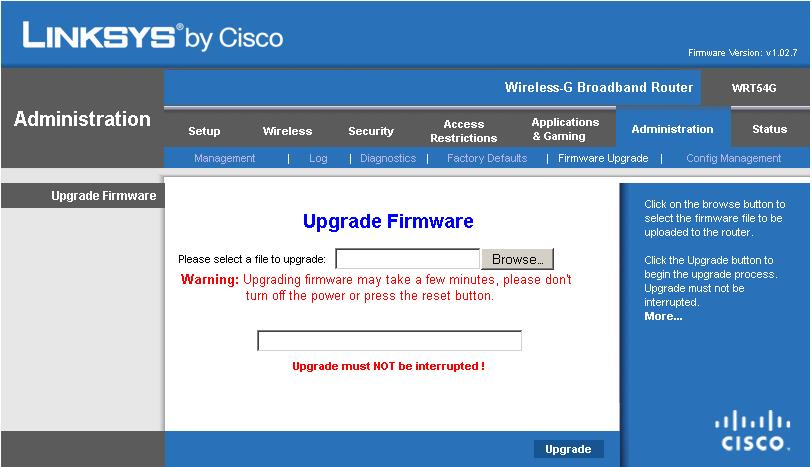 The other day I was having some performance issues on my network, so I decided to see if there was an update to my Linksys router’s firmware. It’s a good idea to update your firmware occasionally since the manufacture can fix bugs, add functionality, and increase security and performance. Check your router’s documentation on how to update the firmware.
On my Linksys router, I open a browser and type the router’s IP address (192.168.1.1 is the default on a Linksys router). Download the firmware file from the Linksys website. The router administration page displays, among other things, the current firm version of the router.  My router was version 1.02.6 and the latest was 1.02.7 so I decide to upgrade it. As part of the firmware upgrade process, the router will restart itself after the update.

The upgrade was successful according to the status page. The router restarted and my web browser refreshed to the administration page that I was on before. Here’s where things got interesting.

I noticed that after the upgrade my the firmware version on the router was 1.01.6 and not 1.02.7 as I expected. I thought that this was strange. “Did I download the wrong firmware file?”, I thought. So I re-downloaded the file and started the firmware upgrade process from the same page, just as I did before.

This is when I noticed the wireless signal strength bars at the bottom of my taskbar were low. Usually, they are full. That’s when I realized I was not connected to my router. I was upgrading my neighbor’s router!! Luckily it came back up fine.

The mistake I made was upgrading my firmware via wireless. So when my router restarted, my computer automatically connected to an unsecured wireless connection. Coincidentally, this was the same router I was using and I was the screens that I would have seen on my router.  The lesson learned here is to connect your computer to a wired Ethernet port if you are going to upgrade your router.