[the_ad_placement id=”before-content”]
I noticed one day that I stopped getting any SCOM alerts in my System Center Operation Manager 2007 R2 environment. As part of my troubleshooting I found a ton of the following warnings in the Operations Manager Event Viewer. I contacted Microsoft tech support and discovered that my RMS was in maintenance mode. I had put my RMS in maintenance mode for 30 minutes when I did some windows updates, but it never come out of it. After stopping maintenance mode and re-starting the System Center Management service on the Root Management Server, alerts started coming in again. The Microsoft tech told me that you should never put your RMS in maintenance mode and when I asked to have some documentation where it said that, he said it does not exist. This a tip that they have discovered in their troubleshooting. During this time the RMS was unable to process agent requests, so the agent holds on to the notifications in a buffer until it can communicate with the RMS again. If you are getting this warning on the RMS there is a good chance that you lost any alerts that the agent was unable to store in the buffer.

The Root Connector has received bad packets which have been dropped. It received 8374 such packet(s) in the last five minutes

For more information, see Help and Support Center at http://go.microsoft.com/fwlink/events.asp. 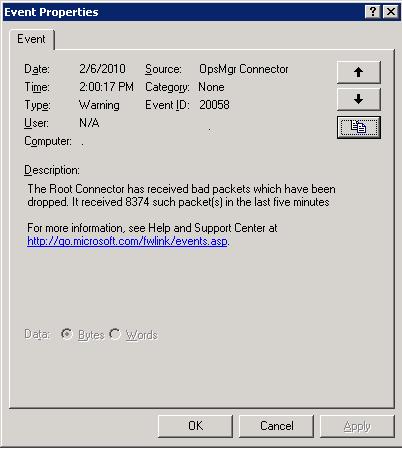