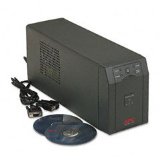 I replaced my old APC SmartUPS 620 with an updated model. I had lost the serial cable that allows you to communicate with the UPS via a computer for the old unit. You will need this cable if you want to use the PowerChute application that comes with the UPS. PowerChute monitors the UPS and can gracefully shutdown your computer before all the juice is gone form the battery.

The new unit came with the serial cable and for a while, I was looking for the correct pinout so I could build a cable myself. So I wanted to get the pinout documented. The cable is a male to female DB9 cable. Well I got my voltmeter and using the continuity setting I mapped the pinout. It would not be difficult to create this cable. Many of the cables DB9 serial cables I had laying around were female to female and it was hard finding a male end. If you have an existing DB9 cable that is not for the APC SmartUPS, cut it in half and solder the wires together that corrisponds the mapping in the diagram below.

Hopefully, this will help others out there that need this cable and don’t want to pay $30 for it.
UPDATE: I have updated the diagram based on the comments I got on this post. Apparently, I counted the male pins incorrectly so I made the correction. Thanks for your feedback.