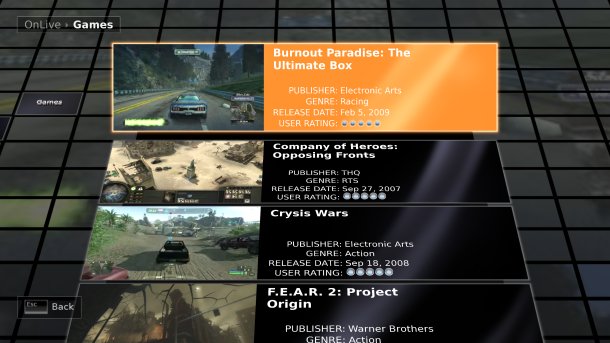 Update: OnLive has shut down in 2015. It was a good idea that I hope gets resurrected in some form

If you have purchased a graphics intensive PC game recently, such as Cryisis, you realize that your computer runs the game like a choppy YouTube video. In order to get a better gaming experience, you need to get the latest hardware, so a $60 game may end up costing you hundreds in hardware upgrades.

Years ago when computing power was extraordinarily expensive, you had a server like a mainframe do all the number crunching serve out results to “dumb” terminals.  What if the graphics and physics calculations of today’s games were subcontracted to servers that did the heavy lifting. As computer power reaches pennies per Ghz and unlimited internet bandwidth increases steadily, the next evolution in gaming is in game streaming and subscription.

Imagine subscribing to the latest graphically intensive game that just came out over the internet. With the streaming model, a video is streamed to your desktop while the game is running on a remote server at high resolution and with high game details on. That means your PC doesn’t have to run the latest hardware to play the game the way it was meant to be played. A recent article has revealed the OnLive will attempt to do just that.

Of course, this would only work if you have the bandwidth to support it. The internet backbones are currently being upgraded, but higher internet speeds will likely cost you more as well. Another roadblock would be the ISP’s proposed cap on your monthly bandwidth. If the unlimited internet bandwidth model changes, the entire business built on internet communications will suffer, including the upcoming game streaming.