Even though you are around your co-workers all day, sometimes I feel that I have no idea what they are working on. It would be nice to send out some kind of unobtrusive message to let people know what you are up to. A service like Twitter would be a good solution to this problem.

Twitter is a great social networking tool for keeping up with what your friends are doing. Your inbox is overflowing already, so sending an email will get ignored and you might be the target of aggression if you send to many. Instant messaging is too “in your face” and is not designed to send out message to multiple people. Twitter allows people to post short messages that other people can subscribe to and read at their leisure. In my organization Twitter is blocked and to be honest I would only want my coworkers to get my updates, so a private server would be great. I did some searching and found a few open source options, but none of them ready for production or not easy to setup. In my searches I found a very interesting article that suggests using WordPress as a Twitter-like service or more of a shared “microblog”. I setup WordPress and use the Prologue theme to make it look more like Twitter and while it’s not exactly the same it does get the job done. You could even leave comments to an individual post. This might be useful if you asked the group a question. Now my team can just update their status via a browser or email, for mobile users, and I think this would facilitate communication among the group, especially if the group is geographically distributed. The last step to make this as effective as possible is notification when your team makes updates. This can be accomplished via the built in WordPress RSS feeds. You can set up any number of RSS readers to notify you of updates of status. The hard part is getting others to update often otherwise it is not as useful. 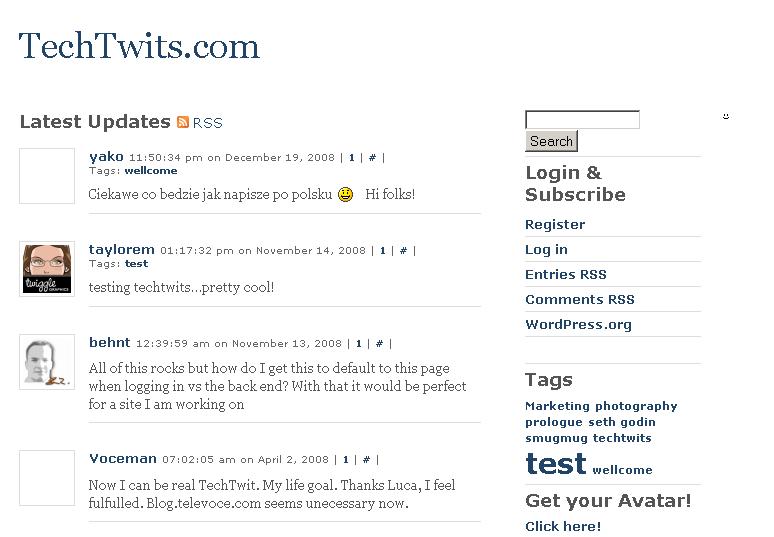 Update: We were quoted on the Winning Workplace Blog.