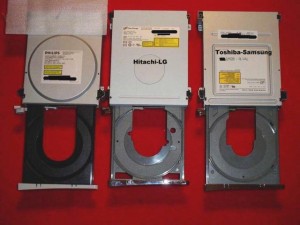 My Xbox 360 RRoD again, but I was able to recover it and I updated the DVD ROM firmware to boot! I installed the iXtreme 1.51 (which has the ability to read new format games) using the Jungle Flasher beta utility. I downloaded the utility and the iXtreme bios as a torrent off the Pirate Bay, however the utilities are available off of Xbins. The package includes the original bios for all the possible Xbox drives since you will need to go back to factory default bios to install the iXtreme 1.51 bios. You can not update to the new version of the bios from an older one.
My drive is the Hitachi 78FK. Each drive has its own procedure for flashing the bios. I had the iXtreme 1.4 flashed, using the Maximus utility, before I got the RRoD. In order for the Hitachi drive to be flashed you need to connect the DVD drive to your computer using a SATA connection and because the power connector on the xbox dvd drive is special you need to have the power connected to the  xbox 360 to power the DVD drive. You can get a connectivity kit to make this part easier for the next time you need to flash the drive The DVD drive then needs to be put into “Mode B”. For the iXtreme 1.4 firmware I used a Slax 2 linux distribution to get the drive in mode B. But the Jungle Flasher utility took care of that from a single utility. I was able to put the drive in mode B, flash the drive with the original bios, and the flash it with the iXtreme 1.51 firmware. It took me a few tries to get it working right. I needed to installed .Net Framework 3.5 SP1 and install the IOPort drivers, but after that it worked great. This is all documented with screen shots in the installion manual. Good job to Team Jungle for getting this all in one tool working.

Now I can go back to playing Halo Wars