This is an updated post to my last post Xbox RRoD really Sucks. I did get my Xbox 360 to work after following the i-hacked xbox fix video. This is how I did it.

Use this guide to open the xbox, http://www.xboxchopshop.com/catalog/man_360_open.php,  as mentioned in the i-hacked post.

Notes about opening the Xbox 360: I used a small screwdriver and leverage to pop the tabs in the back of the xbox. You will hear a popping noise when you push on the small tabs. This can be very frustrating to get the cover off. I recommend getting the Xbox 360 Unlock toolkit from www.mod-chip.com for this part and save your sanity. 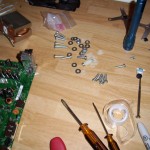 Notes on materials: You can purchase these parts online and save yourself a little headache, but if you are like me and can’t wait I found similar parts at a local hardware store but I did have to make a few modifications which I will talk about later. You can also use 3/16 inch machine screws and the smallest washers that fit on the screws. The M5 screws have a better thread fit than the 3/16 inch however. 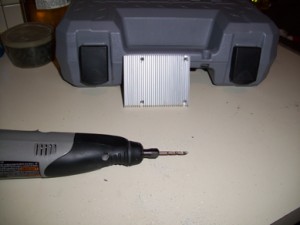 After you have opened the Xbox 360, removed the motherboard  and heat sink X-clamps as depicted in the video, you need to unscrew the bolts off the the heat sink where the X-clamps attached. You will be screwing the machine screws directly into theses screw holes through the motherboard.  My screws happen to be a bit longer than the ones in the parts list so I needed to drill through the flat heat sink to get the screw to go in all the way. If you buy the parts from the item list you will not have to do this . If you do, drill the hole from the top instead of through the screw holes to avoid damaging the threads. 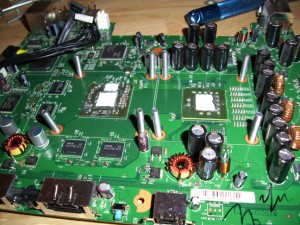 According to the video I put some thermal paste on the chips after cleaning them off.  Then with the motherboard on its side so the screws wont fall out,  hand screw the bolts into the heatsinks until thy are snug. Do not tighten yet.

Plug the video cable, power cable, and daughter board (the power button ) in and allow the Xbox to overheat.  You will see 2 flashing red lights to let you the chips are overheated. 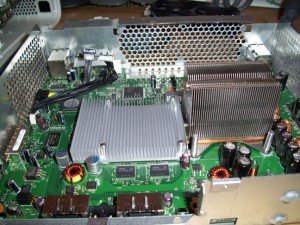 I thought I would never get my Xbox 360 working again, but this fix is relatively easy and is worth a shot. This will void your warranty (if you care) and you might as well mod the Xbox 360 DVD drive to play your backed up  games while you have it opened. You need to update the firmware on the DVD drive to play backed up games. Installing the Blaster 360 will be handy so you don’t need to open the Xbox anymore when new firmwares come out.

, make sure you get the extended warranty plan from BestBuy or whatever store you get it from. It paid for itself for me since I had to return my xbox 3 times for RRod.

Microsoft may have permanently fixed the RRoD problem in new hardware, so you don’t have to be afraid of the RRoD anymore.